Man is born broken. He lives by mending. The grace of God is glue.

GIRL at party:"Did you really come here with Lloyd Dobler? How did that happen?"
DIANE: "He made me laugh." 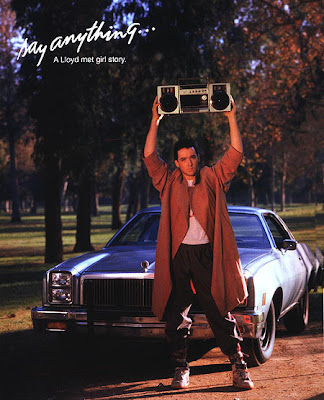 Ahhhh, Say Anything.  It was on last night on the Encore Channel, and of course - I had to sit down and watch the whole thing.  I love that movie.  I mean I really love it.  Why?  Well, it is an iconic movie about teen love and teen angst.  It's not like I am among a minority here.  It's also my generation.  The movie came out when I was nineteen years old.  A time when the idea of an adorable and obsessed suitor was romantic.  A time when I relished the thought that someone out there might be willing to do anything - to say anything - for my love.
Have you seen the movie recently?  The casting was genius.  Ione Skye is so beautiful.  Whatever happened to Ione Skye?  And I love that 'Frazier's' dad is so young in this movie.  Did you notice that Frazier's ex-wife is in the movie too?  (Lillith!)  Where is Kelsey Grammar, I ask you?  Oh, and we can not forget Lili Taylor.  I adore Lili Taylor. She is too cute and quirky for words.  And others that were just starting their career - playing bit parts.   Jeremy Piven and Eric Stolz.  Of course, we can't forget that Joan Cusack played - fittingly - the sister of John Cusack's character.
What else was there to love about this movie?  It's perfect that Lloyd Dobler is a misfit.  John Cusack encompasses the underdog leading man role perfectly.  I think they did a good job humanizing the characters.  I believed in them.  That first scene when Lloyd and Diane are kissing in the back of the car.  Lloyd is shaking.  He's shaking!  And when Diane's father goes to jail.  There is no sugar coating.  I love the lines:  Lloyd - "How are you doing?"  Diane's father - "How am I doing?  I'm incarcerated!"  Of course, in the end, it is the 'love conquers all' message that rises above.  Doesn't everyone want to believe that?  Didn't we all wish (at one time) that we could hold up a boom box blasting some apropros song, and win back the one who has just rejected us?  Oh, if only it were that simple.
What happens as we get older?  We become jaded.  I hate that word, and I hate the fact that it actually applies to so many situations in life.  But its true.  As the years go by we start to recognize that many of our youthful romanticisms border on stalking.  Ha!  And this too - we have to let go of our original concept of 'love conquers all' - and grieve the notion.  Hopefully, with time, a much more complex and wholistic concept of 'love conquering all' will replace the original one.  But this more complex version is just that - complicated.  Difficult to believe in during painful times.  The truth so much more profound but no where near as romantic as our first version.
Ah well.  Here again is why - still to this day - I love the movie Say Anything.  It is sweet and happily nostalgic to revisit that time in life when I believed that something outside of myself might sweep me off my feet and save me - doing all the hard work of personal redemption, on my behalf.  Oh - to be saved from having to do that work on my own.
In truth, I've learned the hard way, that the only true redemption comes when I am in there fighting the good fight, for myself.  Learning to love myself without a Lloyd Dobler in tow, has been the hardest thing I've ever had to do.  I am so completely full of deficits and mistakes.  Still, there are those moments when I can feel sweet forgiving grace bubble up from deep within.  As for those moments - if I were to say something - say anything - I would say this:  Indeed.  Love conquers all.

Chel....reading this post and the one from your adventures to Tahoe I know we must have been separated at birth! I love you dear!!
Krissy

GREAT movie! My gal often told me that I reminded her of John Cusack. Then we watched "Say Anything" together. Neither of us had seen it before. Needless to say, she called me Lloyd for the next week! ;)